Global Economic News | Japan's Exports Fell for the Third Months in a row, but Increased to China

According to a report of Reference News on March 19, the trade statistics quick report for February, released by the Ministry of Finance on March 18, had shown that the value of Japan’s exports fell 1.2 percent year-on-year to 6.3843 trillion yen (100 JPY is about 6.02 CNY), the third consecutive month of decline. However, Japan's exports to China rose 5.5 percent to 1.1397 trillion yen, which turned into an increase after three months.

Japan's exports fell for the third month in a row, the first year-on-year decline since 2016, when the emerging market economy has seen a slowdown, the Nihon Keizai Shimbun reported on its website (Nikkei.com) on March 18.

Japanese exports to China fell 17.4 percent in January from a year earlier, the report said. Business activity was considered to have stalled for a longer period in January as companies from Greater China took the Lunar New Year holiday (which fell in mid-February last year) in early February. Japan's exports to China, which were easily boosted by the reverse effect after the long holiday, turned into a year-on-year growth in February.

Japan's exports to Asia, including exports to China, fell 1.8 percent in February to 3.3141 trillion yen, the report said.

In terms of exports to the United States, the report said, exports such as semiconductor manufacturing equipment increased. In the respect of import, Japan has seen an increase in import of aircraft from the US, among others. The trade balance was 624.9 billion yen favorable balance, down 0.9 percent compared to the previous year.

The report also said that Japan and Europe Economic Cooperation Agreement (EPA) came into force in February, Japan's import and export of automobiles to Europe have increased. The trade balance was 58.2 billion yen favorable balance, a 36.9 percent increase. 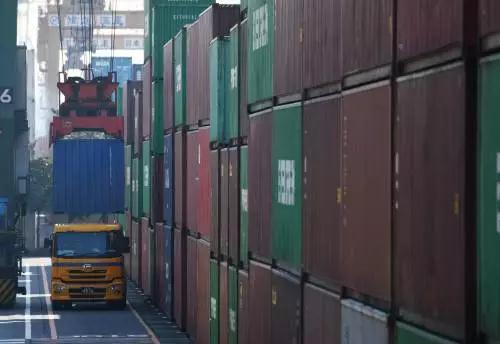 The picture is a container terminal in Port of Tokyo, Japan