On August 11, Mr. Nong Duc Lai, Commercial Consul of the Consulate General of the Socialist Republic of Vietnam in Guangzhou, and the newly appointed Commercial Consul Mr. Nguyen Ngụy Fu visited IFA and were warmly received by Vice President Mr. Jiang Ding and Deputy Secretary General Ms. Tan Wenyi. The two sides had an in-depth discussion on the direction of cooperation to promote the export of Vietnamese food and agricultural products to China. 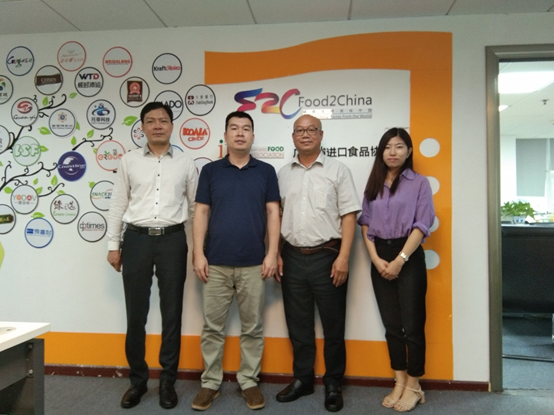 Firstly, Consul Nguyen affirmed the important role played by professional trade associations in promoting the development of the industry, and noted his hope to deepen business cooperation between local professional export associations in Vietnam and IFA in the future. Subsequently, Deputy Secretary General Ms. Tan briefed the two commercial consuls on the developing status of IFA and the Four-in-One service items of Food2China. Vice President Jiang introduced IFA offline touring exhibitions and related activity cases, and suggested using IFA online matching service and online display platform for Vietnamese exporters who have not entered China. For those who have already entered China, priority should be given to participating in F2C touring exhibitions held in second- and third-tier cities. At the same time, Jiang also analyzed the superiority of Vietnamese food in China's imported food market, while highlighting the position of Southern China market in imported food market.

So far, the two sides have cooperated many times since 2017. During this visit, the two sides developed a further discussion on the future direction of cooperation and how to promote the development of Vietnamese small and medium-sized food enterprises in China. Nguyen said that the one-stop matching service of Food2China is very comprehensive and he hoped to further promote the image of Vietnam's food export by means of Food2China offline exhibitions and online matching, so as to jointly promote the economic and trade development of China and Vietnam.

Through this exchange, the two sides will further strengthen substantive cooperation and bring more high-quality Vietnamese food to Chinese consumers.

IFA will continue to carry out extensive cooperation with the consulates in Guangzhou to bring more high-quality imported food to South China, thereby radiating the whole country and boosting the in-depth development of the imported food industry.