On the morning of March 5th, Mr. FABIAN GEMS, commercial consul of the Consulate General of Austria in Guangzhou, and his delegation visited Guangdong Imported Food Association and had a friendly talk with Mr. Qi Yilong, President of our association. 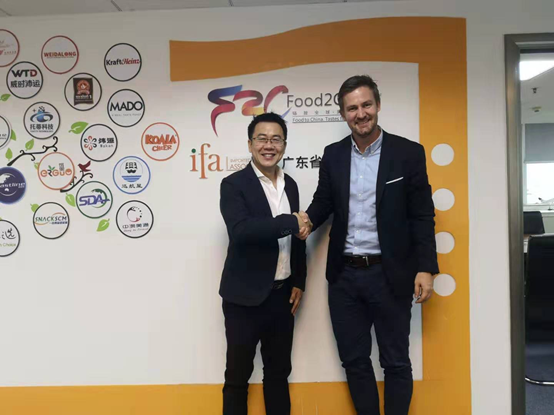 In this meeting, the commercial consul introduced the general situation of Austrian food and the future promotion plan in the south China market to President Qi. In recent years, Austrian food and beverage exporters have been expanding their presence in the Chinese market, but most of their products are not yet well known in the Chinese market, so they need to expand their brand promotion power. To this end, relevant government agencies of Austria will also increase incentives for exporters and provide support for going abroad to participate in exhibitions and trade investigation activities. At the same time, President Qi also introduced the status quo of the association and the F2C imported food four-in-one platform to the delegation of the Consulate General of Austria, which was recognized by Mr. Consul General.

The commercial consul said that in the future, he would strengthen cooperation with the association to bring more Austrian food and wine to China, and try to promote the combination of Austrian food, culture and regional customs.