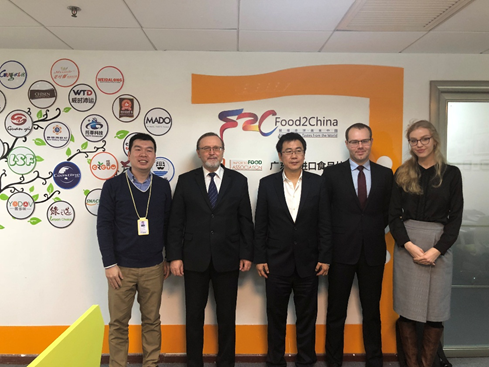 Mr. Barganovsky briefed the Association on the general situation of Belarusian food. In recent years, Belarusian food and beverage exporters have been expanding their development in the Chinese market, and local government agencies will give them greater support and incentives.

Subsequently, President Qi also introduced the Association's multi-platform work (four-in-one) to Mr. Barganovsky and his delegation, which had received the affirmation and recognition of the Consul General. At the same time, President Qi also pointed out that the quality of Belarusian products has not yet been known in the Chinese market, and needs to expand brand promotion with greater efforts. In the future, the association will strengthen cooperation with Consulate General of the Republic of Belarus in Guangzhou to bring more Belarusian cuisine to China and make more people aware of Belarusian special cuisine.