On December 11,2020， the Managing Director Cathy Yao and Commercial Officer Patrick Lyu from the British Columbia China Office and the Senior Commercial Officer Chris He from the Government of Alberta Guangzhou Office  paid a visit to our Guangdong Imported Food Association (GDIFA). Mr. Wolfgang Qi, the President of GDIFA, and Ms. Wency Tan, the Deputy Secretary-General of GDIFA gave them a warm reception.

The two parties conducted in-depth discussions about the development and promotion of Canadian fresh foods, fruits, alcohol, health products and packaged snack foods in China. During the exchange between the two parties, the three Canadian representatives introduced the general categories, related activities, and general development directions of Canadian food in China. Afterwards, Ms. Wency Tan, the Deputy Secretary-General of GDIFA, explained some events we had held this year and the relevant services of Food2China.

Canadian representative Director Yao mentioned that the specialty foods in the B.C. Province include seafood, blueberries, cherries, wine, ice wine, and packaged snack foods. She also mentioned that the production of blueberries is ten times larger than that of the cherries. Previously, Canadian food mainly focused on the eastern China market, but currently, they hope to work with our association to deepen their roots in the southern China market, which was the main purpose of their visit. The two sides discussed several development directions in detail, such as online matchmakings and offline wine tasting events. President Qi also said that GDIFA will be willing to provide corresponding training and guidance to Canadian food-related companies to enhance their experience of the southern China market. 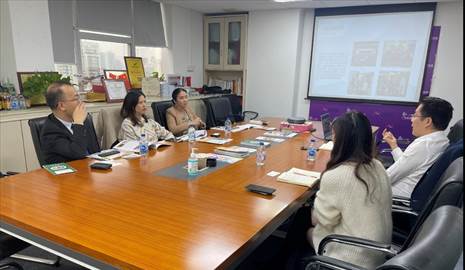 Finally, the two parties conducted in-depth discussions and reached a consensus on the cooperation of online matchmakings, offline wine tasting events and the promotion of the Food2China platform. This visit and exchange  have further deepened the friendly and mutual beneficial relationship between the two parties. In the future, the two parties will continue to strengthen their cooperation to garner better business their experience in southern China market for Canadian companies and bring more high-quality Canadian food to southern Chinese consumers. GDIFA will continue to carry out extensive cooperation with the embassies and consulates as well as the China offices of the governments of various countries to bring more high-quality imported food into the southern China and the nation.